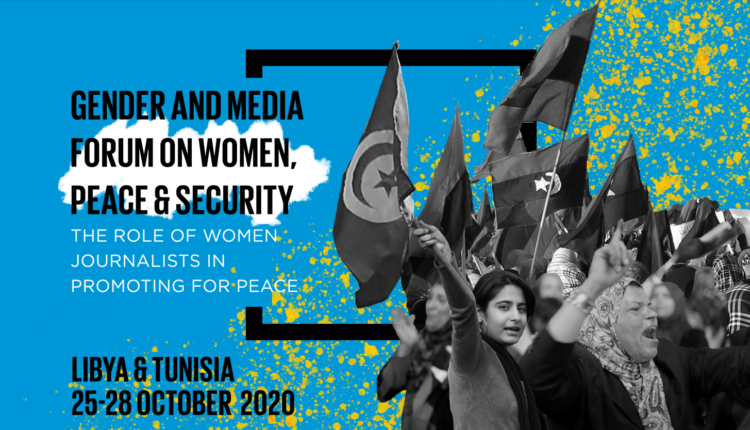 From my quarantine room in one of the capital city’s hotels in Tunis, I sat facing my computer’s camera to participate in an online workshop for Tunisian and Libyan female journalists in the framework of the “Gender and Media Forum on Women, Peace, and Security: The Role of Women Journalists in Promoting for Peace” co-organized by UN Women and Deutsche Welle Akademie (DW), as part of the on-going EU-funded project “Media in Libya – Stability through Reconciliation”. My task was to facilitate one of the workshops organized by DWA, entitled « The Role of the Media in Peacebuilding processes from a Gender Perspective”, in which a number of Tunisian and Libyan female journalists have participated.

As with all virtual workshops, the challenge was to make sure that a three-hour workshop was enough to address such an important topic and to come up with a set of implementable recommendations in both the Tunisian and Libyan contexts. The challenge was huge but the motivation shown by the participant journalists, as well as their rich experience, made the workshop a space for valuable discussions.

Our workshop focused on three main topics: Journalism work ethics, Peace Journalism; and the role of female journalists in peacebuilding processes. The expert, Walid Dardiry, opened the discussion with some opening remarks to place the workshop in its general context, as it coincides with the twentieth anniversary of Resolution 1325 of the Security Council. This Resolution acknowledged for the first time the importance of the full, equal and meaningful participation of women in conflict resolution, as well as the need to enhance women’s role in peacebuilding and decision-making at all levels and in the context of peacebuilding and transitional justice.

In the Libyan context, in particular, the expert, Walid Dardiry, said that the role of female journalists must be crucial to the reconciliation and peacebuilding processes in Libya. None of these processes can take place without the full commitment to the standards of journalistic ethics and peace journalism, in addition to fighting polarization, fake news and hate speech; as the purpose of journalists should be to make sure that they are part of  the Libyans, and not part of the problem“ as Annabel McGoldrick said.

Then started the discussion. We spoke to the participants and heard from them regarding the concept of the ethics of Media and Journalism. We heard their opinions on the ethics of traditional media and sharing on social media platforms.

We also asked numerous questions in this regard. There was a variety of answers but most of them focused mainly on the necessity to ensure credibility, fact-checking, respecting human-rights and refraining from disseminating hate speech.

The second part of the discussion highlighted the different experiences the journalists went through in covering sensitive topics. The participants presented their own stories on harassments and attacks on social media when covering taboo“ social topics or political issues.

The discussion explored the role of different bodies and institutions monitoring violations of journalistic ethics by the media. What is the role of these institutions and are they really necessary? The participants tried to find an answer to this question, particularly through the Tunisian experience, in light of establishing Independent High Authority for Audiovisual Communication (HAICA), and its role in adjusting the media landscape. Following this section, the participants concluded that such an institution is necessary in the Tunisian and Libyan contexts, and that it is highly important to train media professionals on respecting journalistic ethics and going beyond financial penalties imposed on media institutions that do  not respect these rules.

In this workshop, we chose to tackle this question through an approached that was based on the “Peace Journalism Vs War Journalism” dichotomy.

The participants agreed that the most important rules of Peace Journalism required the journalist to go beyond fact and news delivery to contributing to the event. We are talking here about the contribution in peacebuilding, particularly through capturing convergence between the warring parties instead of focusing on their differences, and avoiding propaganda for a party over the other, as journalists promoting war are actually promoting division and fragmentation.

The participants also stated that their work should not in any way contribute to disseminating fake news and promoting hate speech, make sure to carefully choose the language and terms used when addressing sensitive topics, and be committed towards Human Rights.

Other interventions made by the participants in this regard during the discussion highlighted the importance of not relying on social media as a news source for journalists. They should instead consider them as a source of information that are to be checked to either justify, confirm of refute them.

To go more in depth in the discussion of this point, the workshop reviewed examples of different angles and topics that journalists can work on in time of conflict, to avoid focusing entirely on war news and declarations only. This included the impact of war on education, health and economic and social situation, in order to show that the war has dire and catastrophic consequences on the national level, and that it is not a matter of winning or losing for one party or another.